A while ago, I wrote a blog entitled “Black Like Me… Not!” and a reader responded to it, asking me to clarify my views. Now, either I was having a bad day, bad week, or bad month, I don’t know, but my response was not right. I was prejudicial towards the reader.

To this person’s credit, his or her response was mature and to the point – I was a “crotchety old man.”

That comment made me take a closer look at myself. I wasn’t happy about the comic book industry, and most of what I had to say was negative, even though it came from a sincere and loving place. Anyone who knows me, 10 Worlds Studio, or has read any of my posts on Facebook, Twitter, and this blog, knows I love comics. I love comics so much, perhaps it has blinded me a bit to what they really are – just funny books.

I always believe a large part of loving something or someone is admitting the truth about it or them – good or bad. That doesn’t mean you just accept the bad. You love despite the bad, sure, but you don’t just not do or say anything. Love is strength, and sometimes having the strength to say, “You suck!”

Despite technology making it possible for more people to express themselves, few opinions are different from one another. In a world where everyone paints their stomach red, the guy with blue paint is weird, a downer, too serious, cynical, paranoid, or a “crotchety old man.” No one wants to listen to the person who uses words like moral or ethical. Those words have been “tagged” conservative, which has been “tagged” with totalitarian, parental, unforgiving, close-minded, white (or “old white America”), crotchety, and old.  No one wants to party with the person who warns not to drink too much, don’t text and drive, porn is unhealthy, and the lifestyle of a marijuana smoker will mess you up.

We went from a nation of white and black extremes, to a confused gray, and now the new extremes of blue and red that allow for nothing and no one in-between.

The crotchety old man has a problem with modern television.

The crotchety old man has a problem with modern music.

The crotchety old man has a problem with modern sexuality.

It’s not good to be the crotchety old man when you’re trying to sell comic books.

In my earlier posts, I tried not to be the “crotchety old man.” I proclaimed my love of comics on Facebook and went about looking at comics objectively.

Let me tell you about “objectivity…” it lacks opinion. It lacks strength and power.

I found myself with nothing to say because nothing I could say mattered. Everything came down to “I like it. It’s good.” People may like what you have to say or write, and you’ll get plenty of “likes” on your social page, but what does that amount to, but a mouse click? I “like” pictures of large breasts, tattoos, and kittens using the toilet. A “like” is mindless. It takes nothing. You expend nothing.

Then, Amazing Spider-Man #700 hit, and I found myself in back & forth online discussions about the merits of the book. I noticed that, while some had things both positive and negative to say, they all said the same things. And, while my comments were not amazing or poetic, no one argued for or against my points – artistic merit, message, symbolism, inspiration, history, and intent – because I don’t think anyone expects that from comic books. No one holds comics to the same standard as novelists, poets, and journalists.  That’s when I read a comment that struck me – “I’ve learned to separate my own investment in the character from the realities of modern comic book production. “

Wow. It hit me like a brick. It took me back twenty years, when comic fans were fighting for comic book legitimacy. We held copies of Watchmen, The Dark Knight Returns, and Batman: Year One, Uncanny X-Men: The Dark Phoenix Saga, Crisis on Infinite Earths, Moonshadow, Grendel, and Mage: The Hero Discovered, Maus, and manga. We held them high above our heads and screamed, “This is literature! These books (it was important to refer to them as books and not comics or comic books) matter! This is our mythology! These are our mythic heroes!”

I have no idea what happened to make the person who made that comment think or feel that way. Nor do I fault them for having those thoughts and feelings, but I imagined a person who let him or herself, multiplied by thousands, be swayed by Marvel and DC when they started publicly disregarding their readers. No, there was no formal announcement, but if you notice the little things, the small shifts in perspective, you’ll see it add up. Marvel and DC know who’s hooked. Those people aren’t going anywhere no matter what they do, and they want the uninitiated. They don’t concern themselves with the readers who buy forty issues of the Fantastic Four even though they hate it. They want the people who wouldn’t. They want the people who don’t.

If you’re a comic book fan and not a “Millennial” aka “Generation Y” (18-24yo), you’ve been disavowed. Worse, you know it, you let it happen, and you keep letting it happen every Wednesday, every week, every month, and every year. A constantly renewed declaration that you, the loyal fan whose bought comics every Wednesday for 20-30 years, don’t matter.

How ironic it is then to see Andrew Garfield stand in a Spider-Man costume at the San Diego Comic Convention in 2011 declaring how much Spider-Man has meant to him since he was a child, and how honored he is to have the chance to portray such a character. Yeah, maybe he was lying. He is an actor. Publicity or not, though, is not the point. The point is someone thought enough about us to think of such a stunt. Someone thinks we matter enough to need our approval. Yes, people, Hollywood thinks more of comic book fans than Marvel, DC, or comic book fans.

I began to fantasize what would happen if we, the comic book fans, stopped buying comics we are unhappy with. What if all the people who said they didn’t like the idea of a non-Peter Parker Spider-Man didn’t buy ASM #700? What if the people who didn’t like Hickman’s Fantastic Four didn’t buy Fantastic Four for the duration he was on the book? What if the fans who say, “I’m sick of all the event comics!” didn’t buy the 12-issues, the side issues, spin-off, guides, and aftermath books?

I thought, “How unfair to the small retailer,” but then it occurred to me comic book retailers carry more than just Marvel and DC comic books, and if they don’t, what I cool way of proving they should.  Don’t like Amazing Spider-Man #700? Buy a copy of Marvel Tales reprinting Amazing Fantasy #15, or buy Dark Horse, Avatar, Arcana, Image, buy anything, but don’t buy a book you don’t want just because you think it’ll be worth something someday. It won’t. Ask the people still trying to unload Superman #75 (1992).

My mind was full of images, and then I remembered something from an old television show, a scene from “V” the 1983 NBC miniseries. There was a scene, after The Visitors revealed their true intentions, where kids sprayed painted over the Visitor propaganda posters. An old Jewish man, a Holocaust survivor played by Leonardo Cimino, saw the boys, took their spray paint can, and painted a V over the poster. 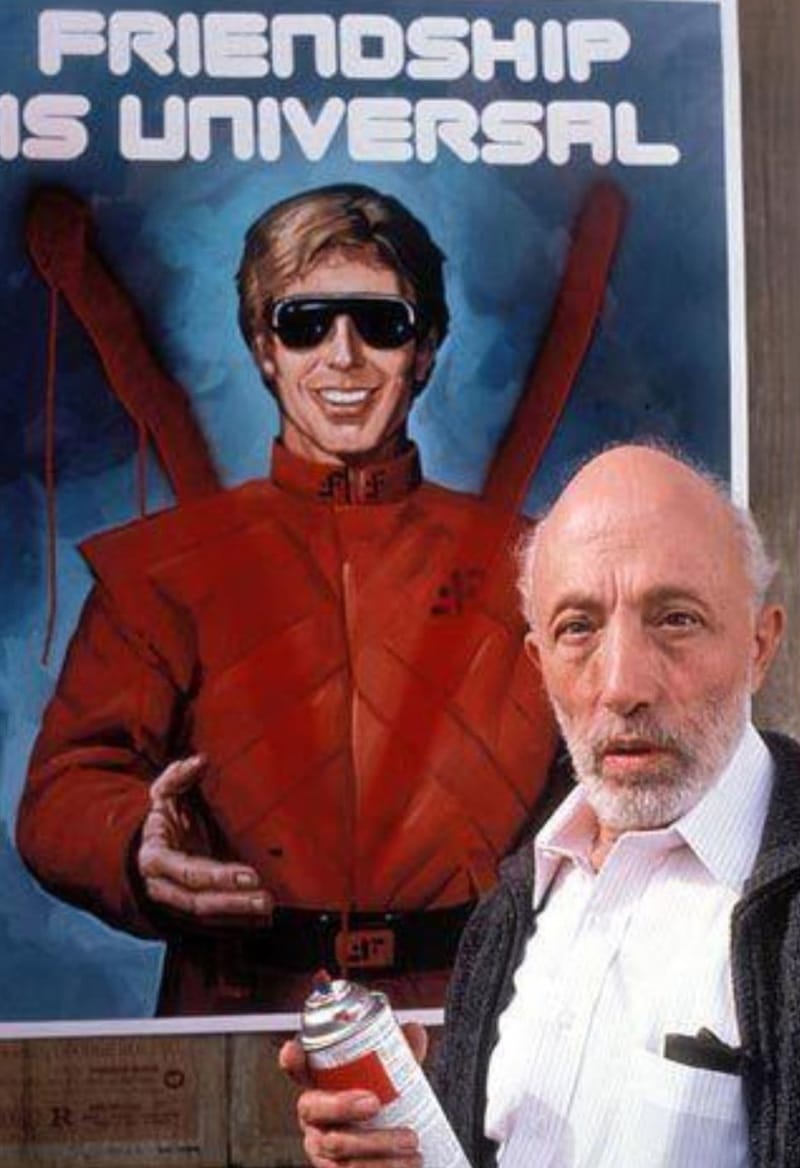 [Abraham Bernstein and Ruby Engels see a group of kids spray painting a row of Visitor propaganda posters]
Abraham Bernstein: No! [Stops kid] If you are going to do it, do it right. I’ll show you.
[Takes the hand of the kid with the spray paint and draws a large red “V” on the FRIENDSHIP IS UNIVERSAL poster]
You understand? For Victory! Go tell your friends…
[Walks away]

No one listened to that old man when he told everyone not to trust the “friendly extraterrestrials” who were anthropomorphic reptiles stealing our resources and eating people.

You see, those “crotchety old men” speak from experience.  They’re “crotchety” because they’ve lived long enough to see history repeat itself. They’re forced to watch people make the same mistakes over and over, no matter how many times they’ve been forewarned. They’ve lived enough and seen enough to realize the truth in those sayings people take for granted because they’ve been said in so many movies, books, and television, people think they’re not true and don’t really happen. People always think life isn’t that simple.

Life is that simple, and that’s why it is so hard. 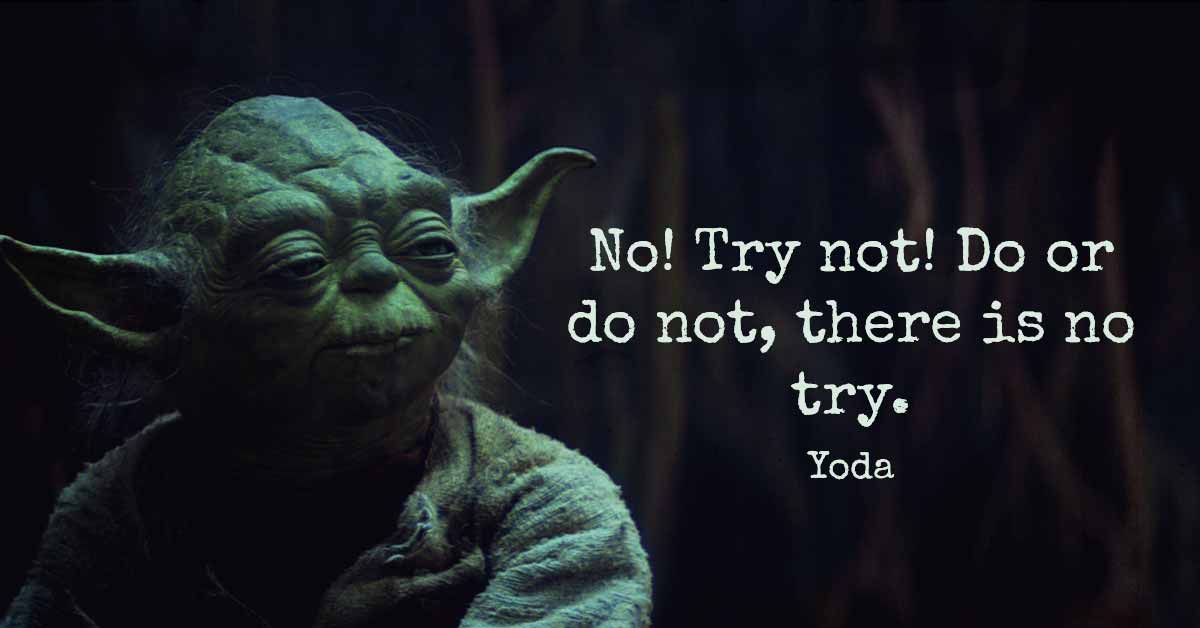 I thought about the old man in The Avengers movie, the “Old German” played by Kenneth Tigar, the only one who didn’t bow to the Asgardian “god” Loki.

Loki: [To crowd] Kneel before me. I said… KNEEL! Is not this simpler? Is this not your natural state? It’s the unspoken truth of humanity that you crave subjugation. The bright lure of freedom diminishes your life’s joy in a mad scramble for power. For identity. You were made to be ruled. In the end, you will always kneel.
Old German: [Stands] Not to men like you.
Loki: There are no men like me.
Old German: There are always men like you. 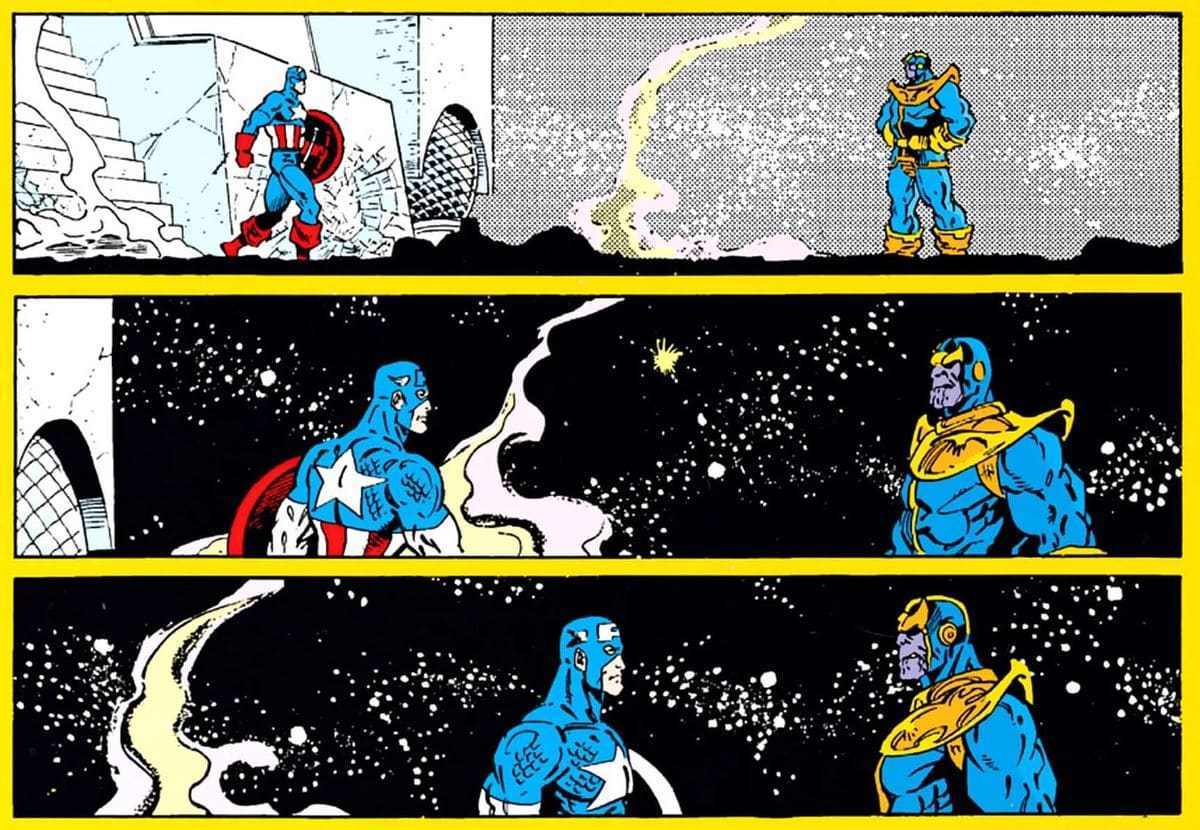 No matter who writes him, or how young they try to make him, Steve Rogers never speaks from a modern perspective, but from a time so far gone we forget it was ever real, and that people once thought spoke, and believed like this…

But, it was my partner, Alex Lugo, who said it best, “Dude, no one listens to you when you’re agreeable.”

Where would we be without our old men.

Well, gather around young whippersnappers. This year, this crotchety old man is going to write a few things you may not like, but you need to read.