The Crotchety Old Man Has Spoken: Black Like Me.. Not! (updated from 2011)

The new issue of Ultimate Spider-Man featuring Miles Morales, the new black – sorry, Puerto Rican – Spider-Man, hit the stores yesterday and the reviews have been good. David Pepose, a Newsarama contributor, wrote: “Where do I begin? Well, the biggest victory that Bendis scores with Miles Morales is that he makes us care about him, and care about him quickly.

Miles Morales is a good (or so it’s implied) inner city kid who wins a lottery to attend a charter school. We don’t know anything about his parents, who look okay, but just them being together is something different when 54% percent of African Americans between the ages of 24 and 34 haven’t married (Karen Peterson, USA TODAY, 2000). The uncle is a crook, of course, but not a common one, as he was able to loot the ruins of Norman Osborn’s lab, where one of the same mutated spiders that bit Peter Parker climbs into his bag to and bites Miles later on.

It was the same thing I saw going to private Catholic high school; the more parents sent their bad kids there, thinking it would change them, the worse the school became. While the public school, by comparison, became less unruly and produced better students. Fast forward twenty years, the “prestigious high school” is in the shitter while the public schools are winning awards. 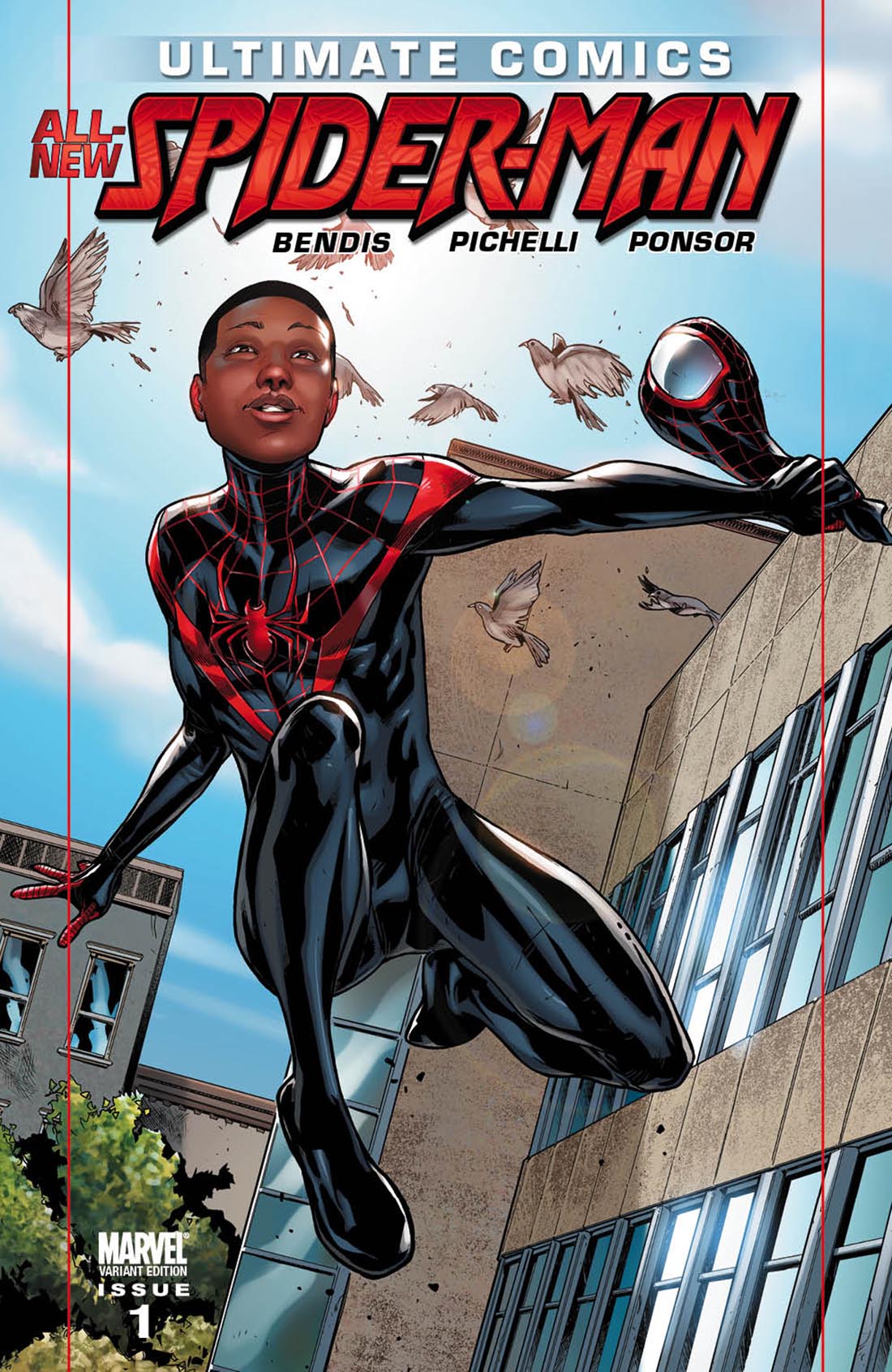 I keep seeing this scenario play out and I see it again here. The more you try to diversify, the more you end becoming “One of Us.”

I saw the same with Milestone Comics. I even had an internet back & forth with creator Dwayne McDuffie in a forum when wrote how I thought, not all, but some titles, specifically “Icon” were derivative. It sucks that my only real communication with him was negative. More weird is I had the honor or meeting him in person for five seconds in 2009 at the San Diego convention. Not knowing who he was, and he not knowing who I was, he walked by my table; I saw him as a customer and I pitched him Lazarus. He said, “That’s a good television pitch.” And I walked away happy because I suck at pitches.

Despite feeling a loss from his passing (RIP), I still hold to my thought s on Milestone, and books that follow that model, trying so hard not to be stereotypes and landing in the same hole. This is not 1974; the Evans Family from “Good Times” is no longer the only black ethnic stereotype. Thanks to Bill Cosby and the success of the” Cosby Show” (circa 1984, because there were two) the “intelligent middle class black family” is also a stereotype.

But how do you fight it? I have the weird idea the only way to combat this is the same that got us into it, do the opposite of what’s expected. If there was once a time when black people in comics were always crooks with a heart of gold, then it changes so they’re all law abiding college grads who become scientists, then go back to the crooks with the heart of gold scenario. 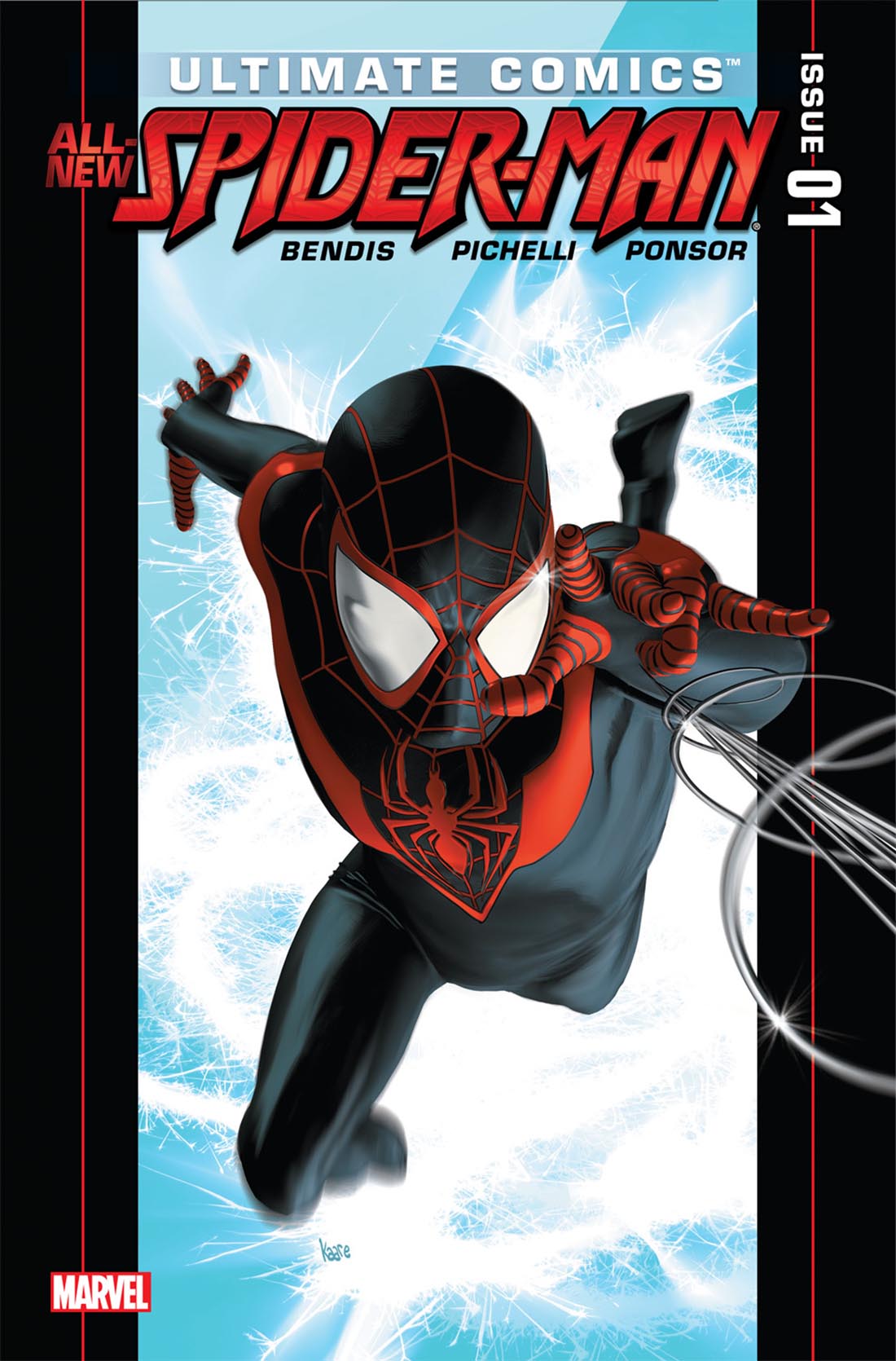 Why does Miles Morales have to be a decent kid with decent folks who goes to a decent school? Wasn’t that Peter Parker, minus the parents? So, your answer to killing Peter Parker is the switch him with a brown skinned version? Oh, and don’t get me started on the first five (5) pages where Osborn talks to a new up & coming scientist who just happens to be black. At first I thought it was Miles’ dad, so it was relevant; dad works from Osborn, brings home mutated spider, spider bites son, new Spider-Man is born. Thanks to the incredibly detailed art of Sara Pichelli, you can see it’s not Miles’ dad, so then you’re just asking yourself why the blatant placement.

Here’s when I show how weird I am by stating I think it more interesting if the new Spider-Man was a crap student and juvenile delinquent whose divorced parents, partly to blame for his behavior, put him in the same school as Parker, while his father and uncle, a breaking and entering duo, jack Oscorp. The spider crawls into the bag, the father visits the son on a non-visitation day, and the son gets bit by the spider.

Do you care about the boy? Hell no and that’s what’s different. If anything, the boy pisses you off for the first few issues because it’s the reverse power fantasy, the school tool, instead of the loser, gets the power. If anything he’s more like us because if we had powers we’d take advantage and be too selfish to see the connection when our “Uncle Ben” got hurt because of it.

Now, think how much more interesting it’ll be to watch this kid, the delinquent, become a hero, see the connections, and learn “with great power comes great responsibility.” Instead of Peter’s inaction causing someone’s death, make our new Spider-Man’s actions do the deed. Add to it Peter’s friends going to school with the new Spider, trying to find out his identity, not even suspecting the school asshole. Then have MJ or Gwen learn the truth and a relationship starts – hate downgrades to dislike, then comes to grips with understanding, turns to admiration and friendship that becomes attraction and love. The difference between Peter and Miles – the delinquent, street smart kid can handle his shit a whole lot better.

The lesson here is nothing in Hollywood ever changes. Life changes, and our stories may look like they change, but they don’t. Joseph Campbell taught there were only so many stories to tell. No matter how different one may seem, it’s only a variant. Sadly, color, gender, orientation may change, but that’s just dressing. The characters remain the same, especially when it’s an IP that needs protecting.

The Experience Is Everything!
JPG