Some Things Are Worse Than Death

The reign of the AMAZING SPIDER-MAN is over with the release of #700, and I’m of two minds about it.

First, for those not in the know, Amazing Spider-Man has been building towards the end of the series and the introduction of a new Spider-Man since #698. Yeah, Marvel will say this was a year(s) in the making, but it doesn’t read like it.

(UPDATE: Okay, I’m putting way too much thought into this, but what if Peter Parker’s death in Ultimate Spider-Man #160 and replacement in Ultimate Comics Spider-Man #1 introduced the idea of non-Peter Parker Spider-Man to readers, and then Bendis’ “Spider-Men” (June – September 2012) let us see how 616 universe’s Peter would give his blessing to a new Spider-Man, making for a smoother transition for what would happen at the end of ASM #700? Just a thought.)

Starting in ASM #698 we learn Doctor Otto Octavius – aka “Doctor Octopus” – has found a way to switch his mind with Peter Parker’s. Peter finds himself in the dying body of, arguably, his worst foe. For three issues, Peter tries to regain his body using Octavius’ memories and hardware to escape a super prison (also releasing Morbius to star in his own Marvel NOW series) and partnering with hired thugs (Scorpion, Hydro Man, and Trapster) to get his body back. He fails. He fails horribly. Octavius, in Parker/Spider-Man’s body, beats Peter, in Doc Ock’s body, but not before Peter can force Octavius to relive Peter Parker’s life through a mind link they now share. Doctor Otto Octavius, by mentally experiencing everything Peter has over 700 issues of ASM, learns with great power comes great responsibility, mourns the death of Peter (still in the body of Octavius), and swears to not only to be Spider-Man, but a superior Spider-Man.

PLOT HOLE #1: Wait, the psychic link Peter and Octavius now share is strong enough for Peter to force Octavius to relive events that will change his moral barometer (forget that Otto is already supposed to have access to all of Peter’s memories and that didn’t do dick), but the link isn’t strong enough for Peter to mentally control or hamper Otto’s activities to prevent Peter from reclaiming his body?

PLOT HOLE #2: If after reliving Peter’s experiences, Otto Octavius now has a respect for life, why doesn’t he save Peter’s?

On one hand, writer Dan Slott opened the door to do something I talked about in my blog (Click Here to Read) when Peter Parker died in the Ultimate Comics (Ultimate Spider-Man #160), to be replaced by another smart, sincerely good (black) character instead of taking the opportunity to introduce a more morally ambiguous inheritor who has to struggle with the mantle of hero.

“Why does Miles Morales have to be a decent kid with decent folks who goes to a decent school? Wasn’t that Peter Parker, minus the parents? So, your answer to killing Peter Parker is the switch him with a brown skinned version?…

Here’s when I show how weird I am by stating I think it more interesting if the new Spider-Man was a crap student and juvenile delinquent whose divorced parents, partly to blame for his behavior, put him in the same school as Parker, while his father and uncle, a breaking and entering duo, jack Oscorp. The spider crawls into the bag, the father visits the son on a non-visitation day, and the son gets bit by the spider.

Do you care about the boy? Fuck no and that’s what’s different. If anything, the boy pisses you off for the first few issues because it’s the reverse power fantasy, the school tool, instead of the loser, gets the power. If anything he’s more like us because if we had powers we’d take advantage and be too selfish to see the connection when our “Uncle Ben” got hurt because of it.

Now, think how much more interesting it’ll be to watch this kid, the delinquent, become a hero, see the connections, and learn “with great power comes great responsibility.” Instead of Peter’s inaction causing someone’s death, make our new Spider-Man’s actions do the deed. Add to it Peter’s friends going to school with the new Spider, trying to find out his identity, not even suspecting the school asshole. Then have MJ or Gwen learn the truth and a relationship starts – hate downgrades to dislike, then comes to grips with understanding, turns to admiration and friendship that becomes attraction and love. The difference between Peter and Miles – the delinquent, street smart kid can handle his shit a whole lot better.”

On the other hand, this issue brings up old arguments I have with Marvel that started with their annulment of Peter and Mary Jane’s marriage with “Spider-Man: One More Day.” What has been the point of everything Marvel has done with Peter Parker/Spider-Man since 2007? Marvel editorial thought Spider-Man had become “too old” to be relatable to comic book readers, despite most readers being in their 30’s or older, and its longevity shortened. They wanted to dissolve his marriage to Mary Jane Watson-Parker and take Peter back to his roots, which meant erasing ten years of character development where Peter went from young adult to mature adult. Where being Spider-Man for Peter Parker wasn’t something forced on him, not a curse, or a chore. It became something Peter chose, wanted, and fought for on multiple occasions where villains tried to take the mantle from him.  “Spider-Man: Brand New Day” erased all of that, putting Parker back with this Aunt and facing all the problems usually associated with the term “slacker.”

Over the four years since “Brand New Day” launched in 2008, Marvel has been building Peter Parker back up to almost where they left him, minus the marriage. Peter goes from living with his Aunt May to having his own place, continuing with the Avengers, working with the Fantastic Four and their Future Foundation, getting a job as a scientist, and known as the inventor of Spider-Man tech. All while making him a more mature character and destined hero. These changes were echoed in his supporting characters  who moved on to new roles – J. Jonah Jameson becomes Mayor of New York, and Aunt May marries John Jameson, Sr. (J. Jonah Jameson’s father), making J. Jonah and Peter Parker related. Peter even tried to mentor a sidekick.

Then, Marvel takes a further leap with ASM #700, putting the mind of a much older man (I couldn’t confirm how old Doctor Octavius is, but he was old enough to marry Aunt May in ASM #131) into the body of Peter Parker and to be the next Spider-Man. A Spider-Man who is young in body, but not mind; an old, fat, formerly dying villain in the young virulent body of a superhero who professes to be superior because he is older, more knowledgeable, and smarter than Peter Parker. What does this new, mentally older Peter Parker do? Well, according to the cover of Super Spider-Man #002, it’s getting with Mary Jane.

If there’s one thing I don’t like about comics, or any entertainment medium that tells a story, is wasting my time, which means wasting my money, and while ASM #700 does offer something interesting, it doesn’t erase going against the initial premise of a revamp that started four years ago. It doesn’t undo disrespecting the opinions and feelings of readers who did or did not agree with the aftermath of “One More Day,” but stayed loyal through “Brand New Day,” only to wind up with the same kind of Peter Parker that was wrong five years ago.

Here’s the deciding factor for me, and why I think “Amazing Spider-Man #700” is a book to be missed – no matter what thought goes into what came before or what comes after Peter’s “death,” no matter what cool ideas it may inspire, it ultimately comes down to how Peter goes out, and it’s like a bitch.

The most hurtful thing about ASM #700 is after 700 issues of Peter Parker proving he’s a hero, not because he’s young, has spider powers, not even because he’s smart, but because of who he is – his perseverance, strength of will, a strong character forged by a hard fought life – Peter is ultimately undone by having his body and powers taken away and turned against him. ASM #700 says that, if Doctor Octavius was always smarter than Peter Parker/Spider-Man, then the ONLY reason he always faced defeat was because Peter had the body and powers to do it. Peter didn’t make Spider-Man a hero, having spider powers did.

It is the saddest, weakest, and most insulting death I’ve yet to read in a comic that undermines everything Stan Lee and Steve Ditko created.  It’s a slap in the face to them, and to us.

ASM #700 forces me to re-examine Ultimate Spider-Man #160 (June 2011) where Peter Parker dies taking a bullet for Captain America and saving the life of Aunt May. Shot, bleeding to death, Peter fights multiple villains and dies in the arms of Mary Jane, proving Ultimate Comic’s Captain America wrong when he judged Peter not ready to be a hero. When the issue was first released, I argued it being an obvious, shallow marketing push. Compared to Amazing Spider-Man #700, obvious publicity stunt though it may have been, it was respectful, memorable, and most of all honorable to their interpretation of Marvel’s flagship hero. Ultimate Spider-Man went out a hero. 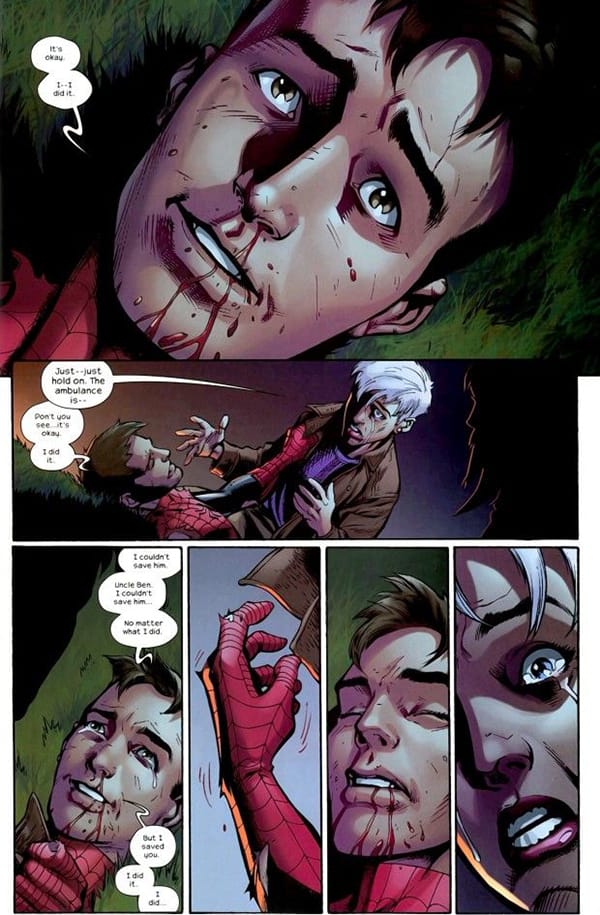 While some will claim Peter “teaching” Doctor Octopus “With Great Power Comes Great Responsibility” makes Peter the winner, it’s weak. It’s a small, weak attempt to put a positive spin on a story that ends with the villain winning and dismantling the heart of a hero.

The only reason I’m not really outraged is because I’m reminded by a friend that this will all be undone, eventually. It may take a year. It may take two, but somehow it will be revealed, while Doctor Octavius’ mind is in Peter’s brain, it’s still Peter’s head, and Peter only thinks he’s Octavius. That, or through deeds combined with memories, Octavius will become Peter Parker in mind and body. However it’s done, the whole thing will prove to be another “you’re a clone/no, you’re the real Peter Parker” trick with a new twist.

I’m done with it. 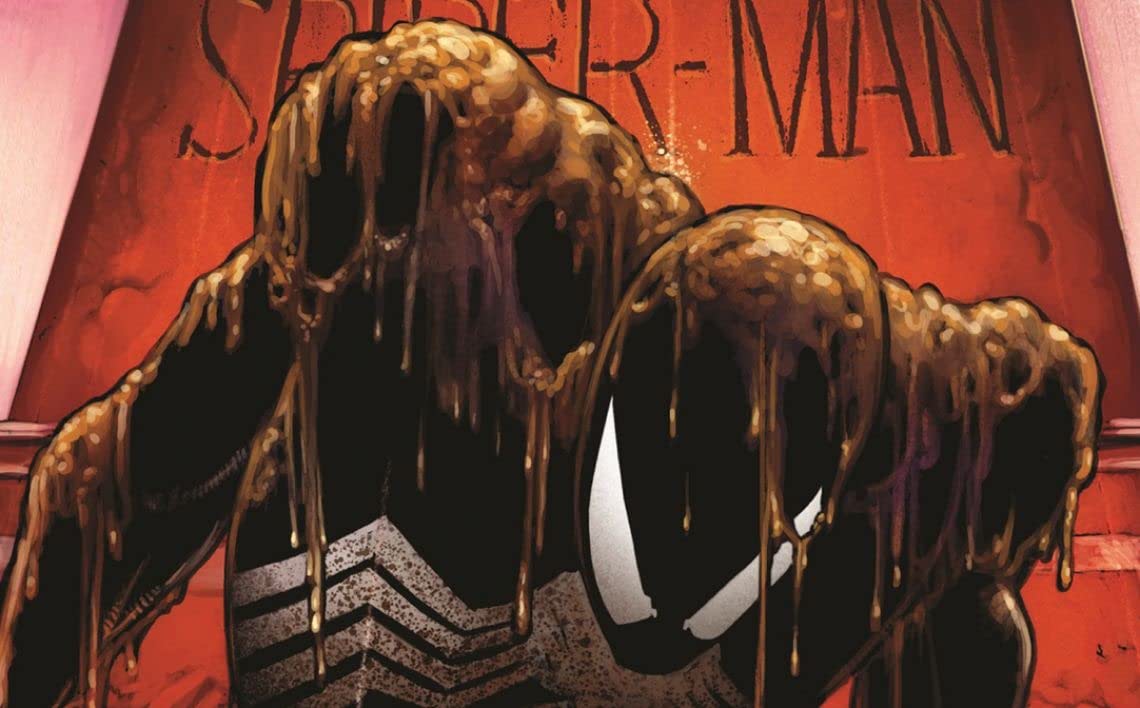