The Crotchety Old Man Has Spoken: Black Spider-Man… It’s Not Just A Suit Anymore! (updated from 2011)

Read the news today, the new Ultimate Spider-Man is black…

This happens in comics whenever a publisher has done everything to revitalize a character, someone plays the black sheep card, making the hero, or someone in their close circle, a homosexual, drug user, prostitute, physically or sexually abused, murder in self-defense, or black.

And, by the way, if you’re feeling pretty good about Marvel being so “open-minded” read the description more carefully – “…the new Spider-Man is a young half-black/half-Hispanic teenager.”

You know, I’m part French, Ethiopian, Native American, Saudi, and East Indian. In other words, I’m black, and so is this new Spider-Man. You can call him “Morales,” but he’s black, and any Hispanic person will look and judge him so, no matter how much Spanish he speaks.

I think it’s a bigger story the new Spider-Man is black and no one is saying so.

But, back to my original point – before I get militant – publishers play the black sheep thinking to draw attention to something unfair or unaddressed in comic books, when what they’re really doing is desensitizing the issue so no one cares anymore. Look what Marvel helped do to black heroes, does anyone take a black hero seriously now? What about gay heroes, who are gay for all of an issue before their orientation is swept off-scene, how many of them are flying around? You mean to tell me a man in a bat suit can inspire an entire city of villains to go “carnival” and a man in a red cape and blue tights can inspire others to heroism, but one prominent gay super doesn’t beget another?

I’m always fascinated by comic books wanting to “get real” but only while it’s profitable. I always find myself asking more questions whenever these things arise. For example, if there’s nothing wrong with a black – excuse me – “half-black/half-Hispanic” Spider-Man, then why is it the Ultimate version that’s getting the makeover? Just like I asked why Northstar is gay and not Wolverine, Jean Grey, or Professor Xavier? God knows Logan and Scott Summers have suffered enough to deserve a change, and Gambit is flamboyant enough to pull it off. 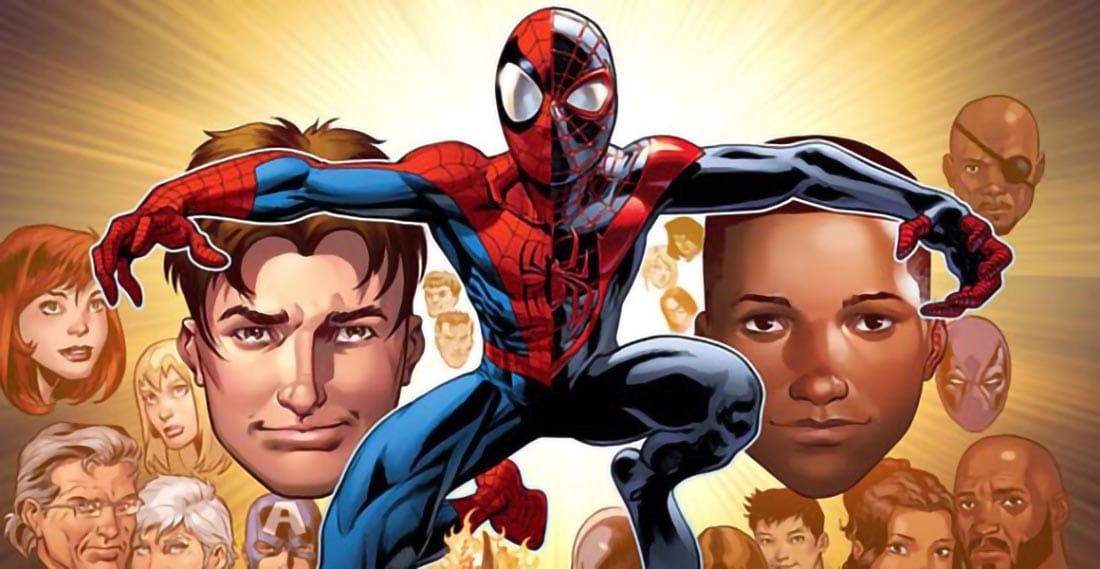 Ultimate Spider-Man’s Peter Parker couldn’t make it past his teens before he bit the dust. Why not kill off mainstay Peter Parker and switch him out, if you really want to make a point? Yes, he’s an important IP for Marvel Entertainment, but nothing is forever in comics. And, I’d wager Spider-Man is worth more than its Peter Parker element. Besides, it’s not Peter’s face on the t-shirts.

So, what’s the big deal? Will I buy this book? No, because it takes more than a change in color, or an ethnic last name for me to relate to a character, or for that character to strike a chord with me, or my kids.

A good character, a well-written character, doesn’t have to change, or find new ways to relate; they don’t have to, and they shouldn’t. I don’t want a superhero that’s like me – I’m a shitty person. I want a superhero I can aspire to be. I want a hero who’s like God, whose goodness and love is beyond me, mythic, inhuman. If I aspire to that level, and only attain a small fraction of it, I can and will be better than most the people you meet every day; that’s what heroes do; that’s what these characters, what these stories, are for.

It doesn’t matter that Frodo Baggins is Caucasian with curly brown hair, that doesn’t stop me from learning what lessons Tolkien is trying to convey in his story, about love, loyalty, friendship, perseverance, and hope.

I don’t have to be rich to know what Bruce Wayne is feeling, lying in an alley with his parents dead at his feet; I don’t have to be an American. Ask any child from Iraq, Afghanistan, Bosnia, or the Sudan how it feels to lay in your parents’ blood, they know, they’re not millionaires, and it doesn’t take a million dollars for them to fight back against injustice, just a dirty bomb strapped to their chest.

A good character transcends all lines, you don’t have to make them relate; they just do.

Next time a comic publisher hits you with one of these open-minded changes, don’t whoop and holler, and don’t get sucked in to the rants about race or orientation; ask yourself why the change should have been necessary in the first place… Then, ask yourself if that book is worth your $3.99 x 12months = $47.88 (not including taxes) multiplied by – how many titles do you buy a week?